← more from
Sunnyside Records
Get fresh music recommendations delivered to your inbox every Friday.
We've updated our Terms of Use. You can review the changes here. 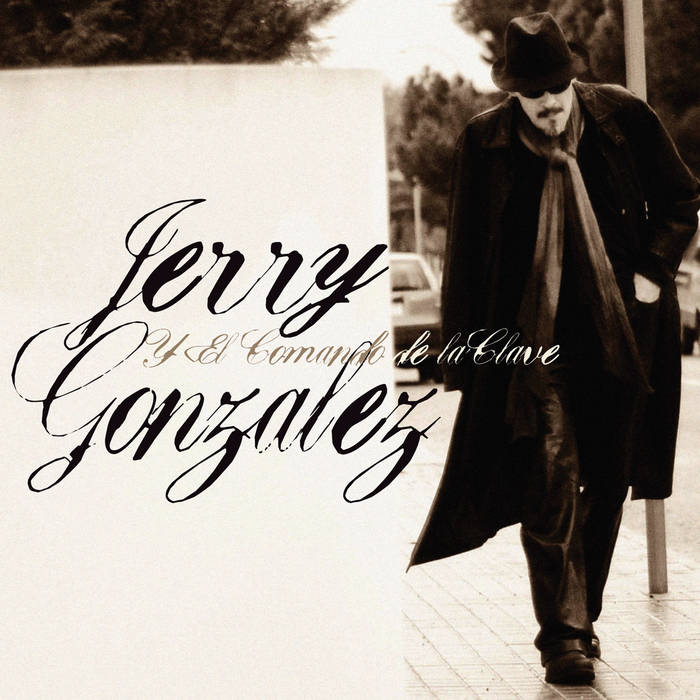 Tracks:
1. Some Day My Prints Will Come (Back from the FBI)
2. Resolution
3. Equipoise
4. Tenderly
5. Obsesion
6. Love for Sale
7. In a Sentimental Mood
8. Avisale a mi Contrario

New York City has been a cultural melting pot since the beginning. With the close proximity of so many immigrants and their unique customs, new cultural fusions are inevitable. Such a fusion was responsible for the creation and success of Afro-Cuban and Latin jazz. These genres have become worldwide phenomena, as there aren’t many communities that haven’t been bitten by a Latin craze.

New York City born, Bronx raised, trumpeter, conguero Jerry Gonzalez has been in the trenches for over forty years as a proponent of Afro-Cuban jazz music, lending his talents to legends and progressives alike. Since the 1970s, Gonzalez has performed in ensembles led by Dizzy Gillespie, Eddie Palmieri, Manny Oquendo, Tito Puente, McCoy Tyner, and Jaco Pastorius. His work with his own group The Fort Apache Band, and as co-leader of Grupo Folklórico y Experimental Nuevayorkino with his brother Andy Gonzalez, has made him a legend in his own right.

In 2000, Gonzalez performed in Madrid, Spain in support of the documentary film by Fernando Trueba, Callé 54. Gonzalez fell in love with Madrid, promptly picked up and moved there. One of the first musicians that he fell in with was Argentine pianist Federico Lechner, who led him to Café Berlin, a late-night spot where Latin musicians gathered. From his new home base at Café Berlin, Gonzalez then began to immerse himself in the local music scene, experimenting with flamenco and reaching out to other Afro-Cuban practitioners.

It took some time for Gonzalez to form a working band in Madrid. He finally gravitated toward a couple of Cuban musicians, pianist Javier Massó “Caramelo” and bassist Alain Pérez, whom he began collaborating with. Drummer Enrique “Kiki” Ferrer joined the ensemble, which turned into El Comando de la Clave. The ensemble came together with the direction of Gonzalez and under the inspiration of his musical ideal, “Los Muñequitos de Matanzas”, the legendary Cuban rumba ensemble.

The culmination of his work with his Madrid based ensemble was the recording of Jerry Gonzalez y El Comando de la Clave (Sunnyside, 2011). The seasoned ensemble recorded an impressive program of modern jazz standards fused with the clave rhythms of Cuban rumba in a day and a half. Gonzalez also invited a special guest, flamenco vocalist Diego “El Cigala” with whom Gonzalez recorded Los Piratas del Flamenco (Sunnyside, 2004), to add a track that also acts as the ensemble’s motto, “Avísale a mi contrario que aquí estoy yo,” or “Warn my opponent that I’m here.” The battle cry of a very invested and loyal band.

The CD begins with an interpolation of Larry Morey’s gem, “Someday My Prince Will Come.” Cheekily, re-entitled “Some day my prints will come (back from the FBI)”, the tune begins with a saccharine piano before Gonzalez decides that the tempo should be brought up into swaying dance. John Coltrane’s “Resolution” is a passionate, vamp based that shows both the quiet introspective and flamboyant sides of El Comando. Percussion leads the way on the Stanley Cowell beauty, “Equipoise”, as Gonzalez plays at his most lyrical.

“Tenderly” is a beautiful ballad by Walter Gross that features the lovely playing of Massó in an extended rumination with the trumpeter. Pedro Flores’ “Obsession” is a powerful explosion with vocals and driving percussion. A fantastic display of what El Comando can do with their Cuban roots and modern jazz approach. “Love for Sale” is a fabulous tune by Cole Porter that features extended solos for bassist Pérez and percussionist Ferrer. Duke Ellington’s “In a Sentimental Mood” gets a lovingly affecting treatment with vocals mingling with trumpet over a bare percussion base. The final track is El Cigala’s take on “Avísale a mi contrario” by Tito Rodriguez. The flamenco vocal blends perfectly with El Comando’ rhythmic conception.

Jerry Gonzalez y el Comando de la Clave is a perfect example of what Gonzalez has been able to achieve after his relocation to Spain. His experiments there with jazz, Afro-Cuban and Spanish music forms have made the music of Gonzalez y El Comando intriguing, original, and immediately identifiable.